Mount Zion Church, located on Rt. 139 just south of Reis Park, was built in 1794. It is the second oldest surviving Methodist chapel in Westchester. It was built by Micajah Wright, great grandfather of Caroline Wright Reis. The cemetery surrounding it holds the graves of many of the town's earliest settlers. Itinerant preachers visited their congregations here. The church served an active community on Primrose Street in the 1800’s.  The community diminished during the late 1800’s, when the reservoirs for New York city’s drinking water were created, demolishing farms , mills and businesses in the area.   The last regular services were held in 1897  and annual services continued into the mid 20th century.  The Town took title to the church and cemetery in 1973. The church and cemetery were listed on the State and National Registers of Historic Places in 1990. The site is used for concerts, meetings and events, and can be visited by the public by appointment. 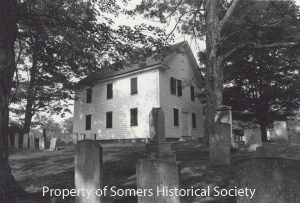