The Elephant Hotel is nationally significant for its association with American circus history.  It was built by Hachaliah Bailey, who became renowned after he acquired the second elephant brought to America (about 1805). Bailey toured with the elephant that became known as Old Bet, acquiring other wild animals and effectively introducing the traveling “menagerie” as popular entertainment in the region. Neighbors and relatives joined him in his menagerie enterprise, sometimes as partners, sometimes as competitors.  The excitement spread to North Salem, Carmel, Brewster, and other adjoining towns.  Soon menageries associated through the Elephant Hotel merged with traveling circus performers to create the American circus that is still popular today. In 1835, the Zoological Institute, a monopoly of menagerie and circus owners, was incorporated at this site. The Elephant Hotel became the symbolic center of this industry.

Hachaliah Bailey (1775-1845) built the classic three-story brick edifice, a rare example of Federal style domestic architecture, between 1820 and 1825, at the height of the menageries’ appeal. The words ELEPHANT HOTEL emblazoned across the building commemorate Bailey’s renowned elephants, the first of which was Old Bet.  In 1827 a gilt wood replica of an elephant was mounted on iron scrollwork atop a granite shaft, in front of the Hotel.

Situated at the intersection of the Croton and the Peekskill turnpikes, the Hotel became the economic and social center of Somers and the surrounding area.  Not only was it the meeting place for the menagerie owners and a stopping place for drovers, it was also a stagecoach stop for travelers between New York City and points north and east.  In 1839, the Farmers and Drovers Bank of Somers was organized and housed in the Hotel.  Numerous balls, soirees, dance schools and other events took place here.

The Elephant Hotel was purchased by the Town of Somers and adapted for use as a town hall in 1927.  It remains the focal point of town activity, with the first two floors as the seat of Town government, and the Somers Historical Society and Museum on the third floor.

On April 5, 2005, the Elephant Hotel was designated a National Historic Landmark, recognizing it as the oldest existing building of significance in the development of the American Circus. 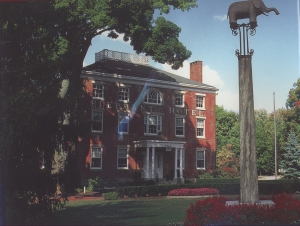