The Wright Homestead is located on Route 139 (Primrose Street) just north of Reis Park. The singular Greek Revival house was built c. 1845 by William Marshall, a prominent merchant in Somers.  Numerous outbuildings were built in succeeding years. The property was sold and changed hands several times until it was purchased by Samuel Purdy Wright in 1869. His great grandfather, Daniel Wright, had settled along Primrose Street on adjacent land before the Revolutionary War.  Samuel and his wife Madeline Dennett Wright resided in the home, and their child, Caroline, was born there in 1880.   Both Samuel and Madeline died by 1892, and in the following years Caroline lived with her uncle, William Wright, near the Somers hamlet, then attended boarding school in New Jersey, and finally studied design at Pratt Institute while living with relatives in Brooklyn. The family homestead was rented to tenant farmers during this period. Caroline married Walter Reis in 1908, and they returned to live at her farm in 1913, shortly after Uncle William died.  While Walter, a traveling salesman, was often away on business trips, Caroline managed the farm.  She also led a life of collecting historic artifacts, philanthropy and active participation in Town politics and community affairs.  Having no children, Caroline willed her home and 82 acres of land, part of which is now Reis Park, to the Town of Somers in 1967.   The bequest stipulated that the property should be used for educational and recreational purposes. The Wright Reis homestead is now a historic house museum, open to the public by appointment. Today Reis Park, the Somers Library, and the Wright Reis homestead are the viable results of Caroline’s generous bequest to the people of Somers. 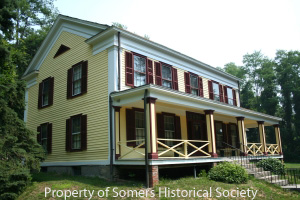